Data the OpenCorporates team is scraping…. from the Data team (Peter & Shyam)
Business licenses. Business licenses are interesting because they contain information about business activities and may have information like trading names and addresses. In the past two weeks, we scraped business licenses from more US states including New Hampshire, Nebraska, North Dakota, Oregon, Colorado, North Carolina and Delaware. The team also tweaked the company fetchers for Uganda and Tunisia.

Bots submitted by community members…. from Peter Evans.
Peter is on holiday so I’m taking over this briefing. We’ve got 18 bots in development through #FlashHacks and a few being submitted already including sailingspring’s scraper for the Banks in Seychelles! There will be a lot to report next week!

Star scraper of the week: We were so impressed by everyone this week at the events that we said everyone is a winner. Is that cheating? Maybe! Worry not, we might have two winners next week!

Campaign & Community Update – #MaptheBanks … from Hera & Seb.
Our #FlashHacks in London & Madrid went really well. You can catch up with all the amazing tweets from it by following the hashtag on twitter. We had about 27 people in London and 12 people in Madrid, most of which were coders and tried their hand at finishing a bot. Civio has written a blog about their experience of running Madrid’s first #FlashHacks which you can read here. We are hosting a #FlashHacks event in Berlin (24th March) at the end of this month to scrap more financial licenses for Map the Banks. If you’ve got friends there, why not invite them?

Our Slack experiment is also going really well so if you want to be part of our community and get live feedback on bots, data sources or just complain about PDFs – request an invite by emailing hera@opencorporates.com

Events we are attending & speaking at….

Know of any event we should be going to?

The next #FlashHacks is…
Berlin, 29th March, 6-10pm >> Join Us!
Want to host your own #FlashHacks? Get in touch hera@opencorporates.com . 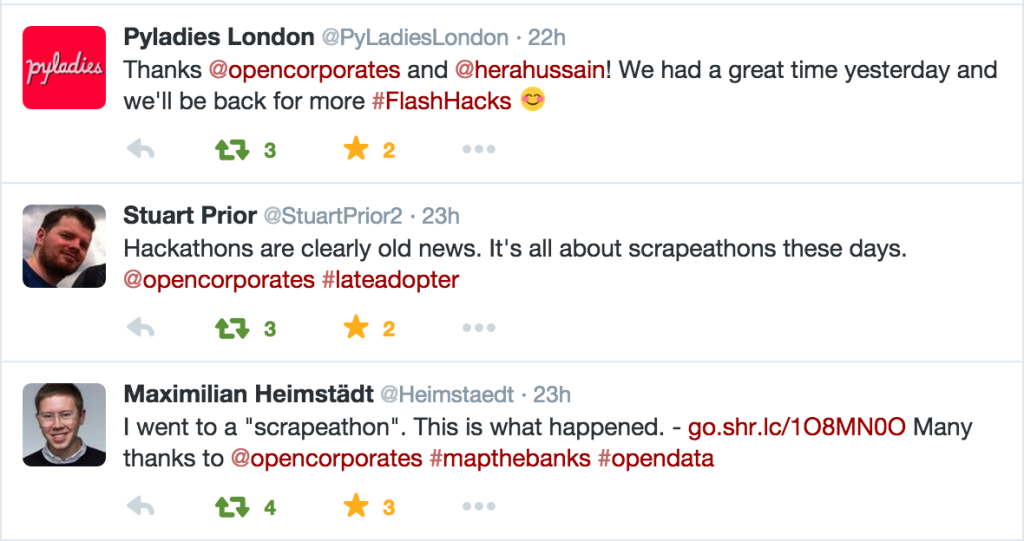