Data the OpenCorporates team is scraping…. from the Data team (Peter & Shyam)
This week, Shyam tweaked the bots for 21 licenses and Peter worked on our data pipeline. We also worked on releasing the 4.0 of the OpenCorporates API which has some nifty new features. It’ll be coming next week!

Bots submitted by community members…. from Peter Evans.
This week, Peter Evans and Hera have been playing with tabula to extract tables from PDFs and figuring out a new format for #FlashHacks which will be a straightforward way to map a corporate network.

We’re starting to review biibii’s bot which extracts australian financial licences and accepted a bot for financial licences in Slovakia from dinotash, though there are still some pdfs that are not easy to scrape. And we’ve been working with Quentin to get his bot running on Turbot, this one scrapes financial licences from the Montenegro central bank.

Want to host your own #FlashHacks? Get in touch hera@opencorporates.com .

Event we are speaking at…
Hera Hussain will be speaking on the one-day conference, Open Data as a Tool to Tackle Corruption at Oxford Centre for the Study of Corruption and Transparency today. 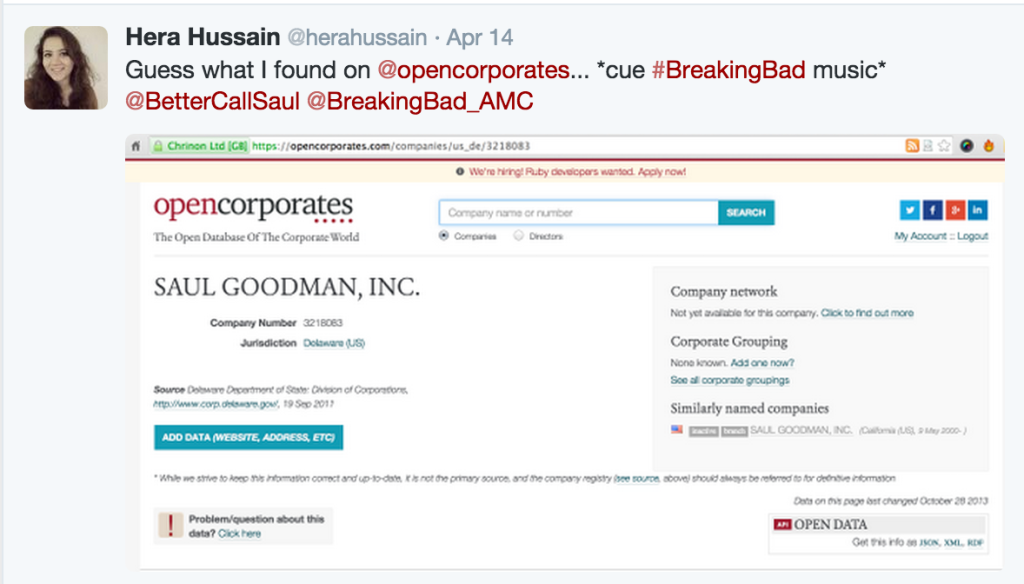 One thought on “Weekly StandUp #9: What Happened at OpenCorporates”